On a cycle tour of Portugal Mick visited a huge, untidy stone circle described by the Portuguese tourist board as being “like Stone Henge only older”. The site is on top of a small hill in an area close to Evora known as the ‘megalithic universe’ due to the high concentration of menhirs and dolmen dotted all over the countryside. 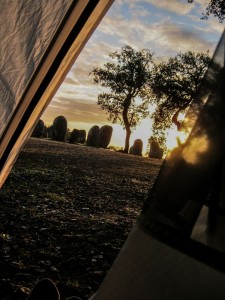 The view from Micks tent in the morning

The sun rising over the circle

It was such a photogenic moment

A view of the elliptical circle

The stone circle is more like a collection of stone circles, or circles within circles consisting of around 100 elliptical stones spread over an area around 80m x 50m. The site actually look nothing like Stonehenge, in fact there is almost no similarity as the site in Portugal has smaller rounded stones positioned in an elliptical arrangement.

There are carvings on around a dozen of the stones with crystals that seem to be growing on the rock surface and evidence of rock manipulation with a stone that looks like it has been cut in half with some kind of tool.

The site is beautiful site, Mick camped a night next to the circle and felt a real atmosphere, particularly in the morning as the sun was rising.

You can see the rounded stones

a stone in the centre 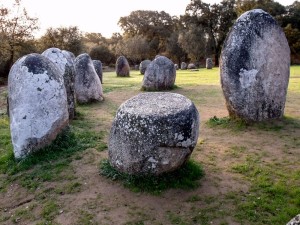 The stone that has been sliced in half

Circular markings on one of the stones

On the same cycle trip Mick visited a number of dolmen in the area north of Valverde del Camino (North of Huelva) that were unlike any of the dolmen he’s previously seen. Your average dolmen has 4 or 5 orthostats (the vertical stones) supporting a capstone but these were like stone igloos. 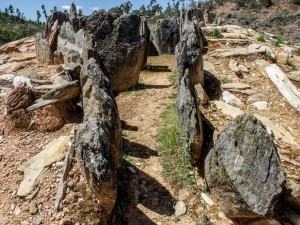 The corridor to the main room

A dolmen on the top of the hill

You can see the flint stone

They were made from large numbers of stones

The stones were much smaller than those found in most dolmen, made from a kind of flint and arranged as if the structures were used to live in, with a corridor leading to a kind of room. The structures were still part of a tumulus with stones jutting out of the side, almost defining the perimeter. 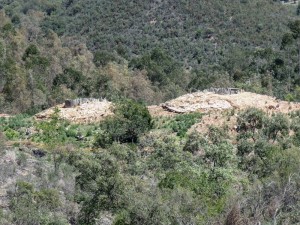 The dolmen from a distance

Flint stones jutting out away from the dolmen

A fascinating site set in lovely scenery so well worth exploring.