An amazing site right on top of a mountain, some believe that the structure on the top is a former pyramid, a very difficult thing to comment on after such a quick visit but it just looked like a build up of loose stones. The views and the carved heads make this a worthwhile trip. 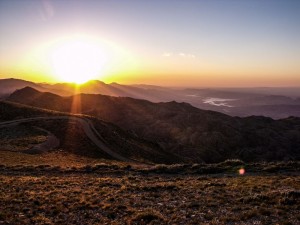 The sunrise was stunning

Two of the animal heads 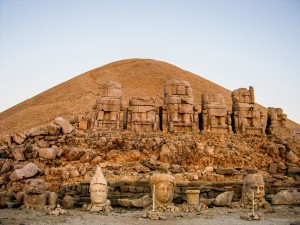 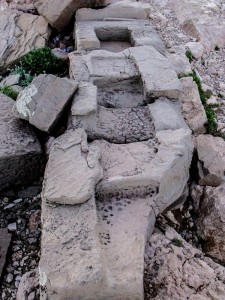 There was some fancy building work 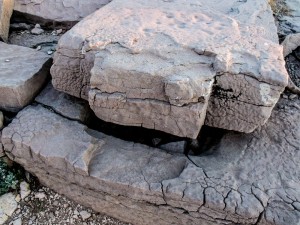 A joint to stand the stones upright 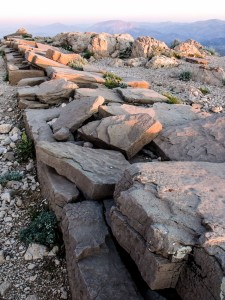 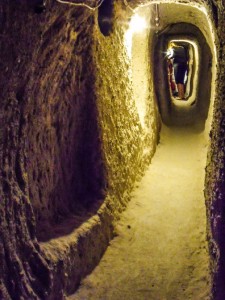 The tunnels were pretty small

One of 40+ underground cities in the area of Cappadocia in central Turkey. This city has 8 different levels with the capacity to house 20-30,000 people and it was built like a rabbit warren with rooms inter-connecting. It is truly an amazing construction job, with an incredible amount of rock removed to create these cities requiring huge numbers of men and man hours, or some serious technology to assist them. 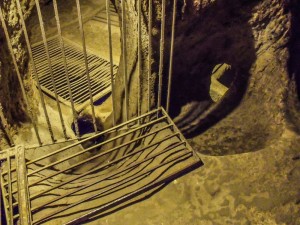 You could through to other layers through holes in the floor

There were also container built into the walls

The circular doors can only be closed from the inside suggesting that the inhabitants were hiding from something. The ventilation system uses varying pressures to create a movement of air from the surface to the bottom of the city and then up again through the network of tunnels suggest at least a basic knowledge of physics. It also reminds us of the Ravne tunnels in Bosnia with its ventilation system created from different pressures in different parts of the tunnels.

One of the circular doors

A wheel for something 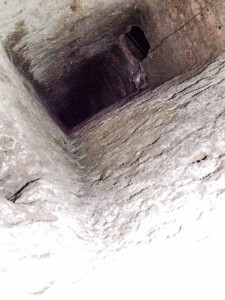 The ventilation system this brings air from the surface

Robert and his wife

One of these underground cities, Derinkuyu was featured in the excellent ‘Ancient Aliens’ series (Series 2 Episode 4) made by the History Channel. Robert Schoch has also done some work on these cities and funnily enough Mick literally bumped straight into him whilst walking around Kaymakli in quite a synchronistic turn of events.

The site is in the middle of the desert near Syria

A fascinating site only recently discovered and along with the weathering on the sphinx it appears to be another significant piece of evidence suggesting human civilization goes back further than previous theories suggest. The stone circles are officially 11,000 year old age and they are considered to be religious sanctuaries. 4 stone circles have been uncovered but radar scanning has shown that there are more to be excavated (22 had been discovered when Mick visited). 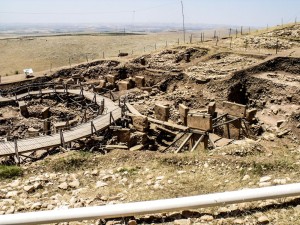 There are 4 circles uncovered 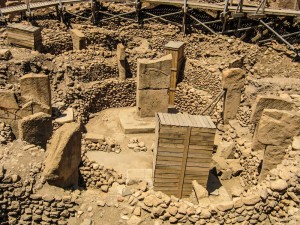 There are stone walls between standing stones

The stones that they have uncovered have animals carved onto them and some of the carvings emanate from the rock as if they were molded and appear almost like they were glued onto the side of the stones. There are carvings of foxes, antelope and some animals that look like dinosaurs, there are also anthropomorphic standing stones with human arms, hands and even waist belts. 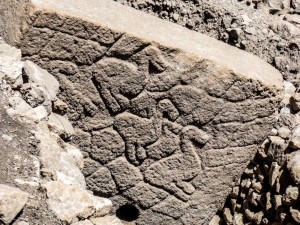 You can see hands, arms, a belt

There is evidence of rock manipulation with the carvings and also strange holes in the rocks in the surrounding area (it looks like something like a football was pressed into molten rock) and others that are larger circles made up of several rocks. There were also small circular holes cut into some of the standing stones in the circles.

Little cup mark indents on some of the surrounding rocks 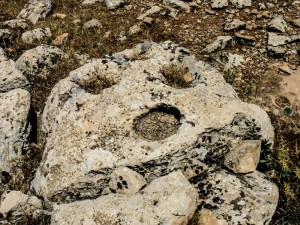 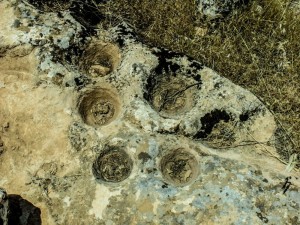 There were quite a lot 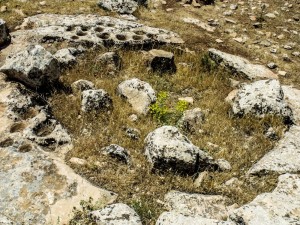 One of the larger circles

In the Sanliurfa Museum there are some amazing statues that were discovered at Gobekli Tepe, in particular two curious humanoid statues, one with black gemstone eyes which looks rather alien and a strange totem pole with a reptilian looking figure on it. 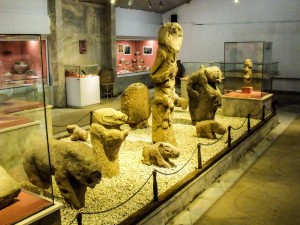 Some of the figures taken from the site

A Column with some amazing carvings 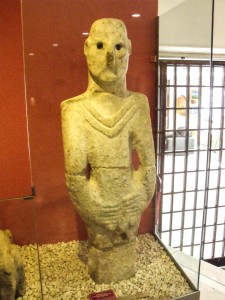 Not from around these parts

Lots of further excavation needs to be done on this site and a lot of research needed to uncover the secrets hidden in this area. 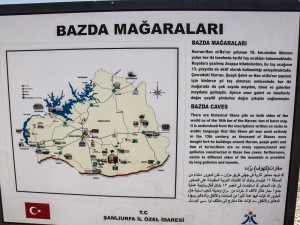 The sign if you want to try and find more info

This huge cave system is close to the Syrian border and Mick was only able to get a quick glance. The ceilings were massive, probably 10-15m in height and there were many different caverns that seemed to go on and on. There were also strange markings cut into the rock and the walls were finished off with right-angles, i.e the rooms looked square or cuboid. 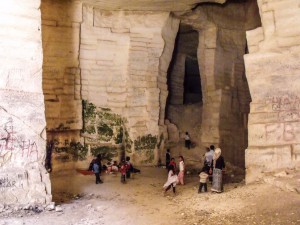 There was a Syrian family living in the cave 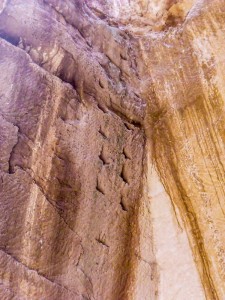 These marks were about 15 metres off the ground

The rooms were huge

You can really see the right angles 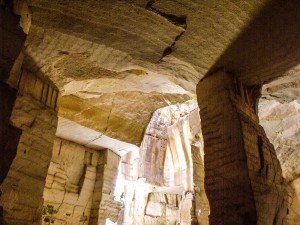 They had Tall ceilings

There was also a tunnel system that the locals said went on for miles and miles under the ground and met up with other caves.

The start of a very long tunnel

A fascinating site and well worth further exploration.

Before cycling across the border into Bulgaria Mick passed 3 dolmen and some standing stones close to Edirne. The largest he saw was in the town of Lalapasa, which has a doorway and was made up of 15-20 stones.

On the outskirts of town

It was a pretty big dolmen

A series of door for elves

The countryside was very pretty

There was a smaller one 2km North of town made up of 3 stones but with other megalithic rocks lying around that may have been a part of the original structure, this one also has a hole in it but it was too small to be a door. 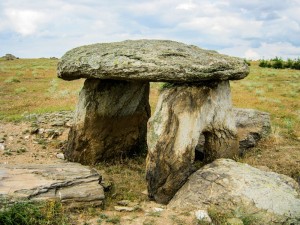 it was a metre tall… 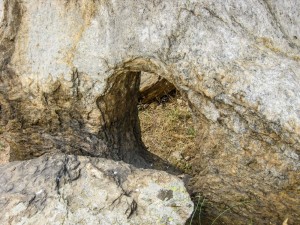 …and had a tiny oven door

There was then another one near Hacidanisment with 4 or 5 stones, a large capstone and some graffiti on it. 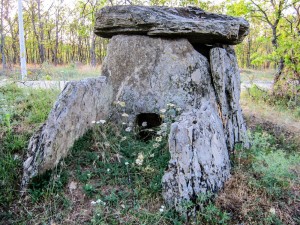 this one also had a tiny oven door

There were a couple of standing stones close to the road and a grave yard in Hacidanisment that looked far older than any we have seen in the U.K. The whole area needs further exploration as Mick felt like there was a lot more to see, cycling through the countryside he kept thinking he was seeing megalithic structures all over the place.

Some menhirs near the graveyard