Mick and Rich spent 3 months touring Southern Africa and high up on their list of places to visit was the megalithic stone circle of Adams Calendar and some of the other millions of circles scattered over the northeast of South Africa and crossing into Botswana and Zimbabwe. They filmed many of the ruins near Waterfall Boven and met Michael Tellinger, the lead researcher who was very busy with his Ubuntu project, which aims to restructure society so that everybody can benefit from our individual efforts not just the elite. While travelling around Southern Africa they realized it is one of the leading countries in the revolutions of permaculture, earth-building techniques and non-monetary forms of organizing society.

On this page you can see details about the ancient and sacred sites they visited in South Africa, Botswana and Namibia as well as the numerous projects they visited to expand our Back to Nature project.

Click to jump to the Eco-friendly projects they visited

The ancient sites in the north east of South Africa are not a recent discovery but our understanding about when and why they were built has changed dramatically in recent times. Officially the stone circles that appear like dry-stone walls are thought to be for keeping cattle but in 2003 a pilot on a rescue mission called Johan Heine discovered a megalithic stone circle on top of an escarpment overlooking the Barberton valley. Since then both he and Michael Tellinger have investigated and explored the region and now believe the megalithic complex is actually an ancient calendar and they revealed a huge network of stone circles (possibly millions) connected by small channels, as well as a couple of potential pyramids in the Barberton valley.

Adams Calendar – The site found at the top of the escarpment is far more than just a stone circle, it is in fact a huge complex of megalithic stones stretching for approximately a kilometre from one end to the other. It starts with a tree which Tellinger claims has a curious cavity about 3m long and 3m deep underneath. Then you continue along what Credo Mutwa and various other shaman who have taken part in rituals at the complex refer to as the initiation path, hundreds of metres of megalithic stones, some of which appear to have been shaped. Next you reach the main stone circle itself, a collection of around 50-60 stones forming a circle or possibly even a circle within a circle and from there as you look south you can see more stones sat on top of a higher part of the escarpment.

The layout of the circle is pretty interesting; you have stones on the north and south, you have stones that appear to be placed in order to point in certain directions and observations by Johan Heine show deliberate placing of the stones to align with the sunset on the summer and winter solstices. Tellinger claims the 4 stones currently found on the east of the structure connect to Egypt with 3 pointing to Orion when vertical and another stone shaped like Horus the falcon-headed god.

There appears to be shaping of the stones, which would not be easy as the dolorite stones used at the complex are one of the hardest stones on the planet and interestingly we found that they disrupt the magnet force, making our compasses spin all over the place.

The film we made

Adams calendar with the initiation path behind

Stones in the museum 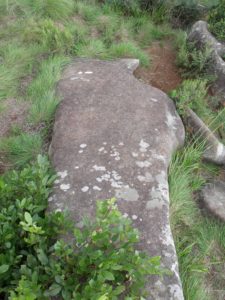 one of the taller stone walls

Millions of Circles – We flew over hundreds of stone circles in the Waterfall Boven area and visited many up close. Tellinger estimates there are between 1 and 10 million of these circles that stretch into neighbouring Botswana and Zimbabwe, and many of them are connected via thin channels or veins.
The shape of each of the circles is unique and some match ancient texts such as Hindu symbols. They are like dry-stone walls only the stones ring like bells, which Tellinger claims was done on purpose as these circles were part of some energy manipulating device that could harness telluric energies emitted by the earth, see our film for a more detailed explanation and to see footage from our flight. 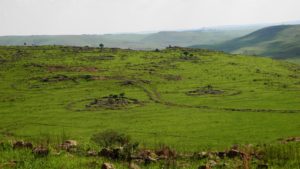 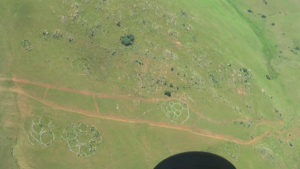 A number of the circles on our flight

Possible Pyramids – We drove right up to the potential pyramids and when we left we were none the wiser. The shape is convincing from some angles but not at all convincing from others but that is not conclusive as Tellinger states they could be hundreds of thousands of years old. He claims there are 3 in the layout of the Orions belt but it didn’t seem to appear that way as we drove around the area. When you look at the co-ordinates of these structures and the structures on the Giza plateau they are close enough to say they are both on the same line of longitude, which is a pretty interesting observation.

Take a look at our drive around them 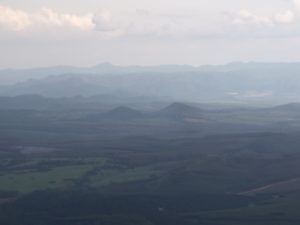 the view from Adams calendar 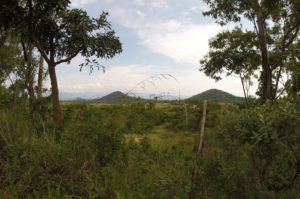 View from the North 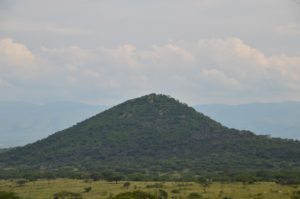 One of the more convincing angles

Tellinger has studied Sumerian texts and the work of Zacaria Sitchin and believes that Adams Calendar was where humanity was created by extraterrestrial master geneticists approximately 285,000 years ago. Another area where he thinks this seeding of humanity took place was in Botswana at an ancient and sacred site called the Serpent Cave in the Tsodilo hills.

Serpent cave– Mick and Rich also visited this site which is now listed as a Unesco world heritage site due to the rock paintings and carvings found in the area. There are many myths and legends associated with this fascinating part of the world, this site was featured in one of Micks Corn Flake films. 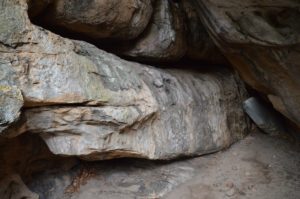 The snake looking rock in the cave 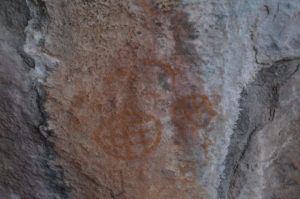 Some of the geometric rock paintings

Twyfelfontein – when driving around Namibia we went to the Unesco world heritage listed area of Twyfelfontein. We found some rock paintings that looked rather alien, a small stone circle which our guide told us was 5000 years old and there were rock carvings of geometric shapes that were allegedly made by shaman when they went in to trance. 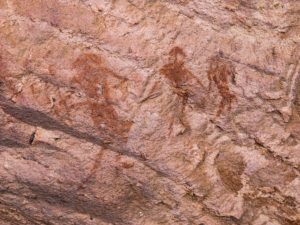 It was during our trip around South Africa that we realized the importance of going ‘Back to Nature’. We visited a number of projects aimed at helping poor people and their communities by educating them to grow their own food, build their own houses and exchange goods without relying on the system.

In this project our aim is to document the revolution in which humanity is choosing to go back to a more harmonious way of living. This includes growing our own food in an intelligent way so that we provide the correct nutrients to our bodies and at the same time benefiting the earth, it also ties in with using earth-building techniques to allow us to live in an environment that benefits our health without harming the planet. These type of projects generally use alternative currencies to exchange goods and services, returning to a trade and barter type way of doing business so cutting out the middle men and not lining the pockets of the money producing families.

Below is a quick summary of those projects we visited but you can read more about them and the Back to Nature revolution on our Project Page.

Ubuntu – a revolutionary movement devised by Michael Tellinger aiming to provide competition to the monetary system, or in effect eradicating money by introducing a more just and more community-based way of organizing our society. Whilst filming the ruins around Waterfall Boven we also made some videos to help Michael and his Ubuntu project, our favourite shows him talking about paying the system with promissory notes.

The C.E.S – the community exchange system is a website that allows you to trade your talents or possessions. We met a number of people using this system in Johannesburg and they have managed to reduce the amount of money they need to earn in a year.

Urban Greening – an inner-city permaculture project in Johannesburg which incorporates aspects of earth-building, creative recycling and uses both workaway and the community exchange system. We stayed with Hanneke for more than a week filming her property and learning all about the nutritional and medicinal benefits of growing your own food.

THE FILM ABOUT OUR VISIT

Shack Replacement, Bloemfontein – a project aiming to educate people from the shanty towns how to use earth-building techniques rather than the corrugated iron to build their houses. The project runs in association with an orphanage called Lebone Village that uses volunteers who work in exchange for a bed and food, they grow plenty of food for the community and they also use recycled waste as building materials.

Earthship, Orania – we visited a top of the range earth-built house in Orania, a town that is virtually off-grid with some amazing examples of earth-building techniques and recycling, such as the houses built from old shipping containers. As well as going off-grid the town has also created its own currency, trying to break away from the unjust monetary system that is forced upon us. 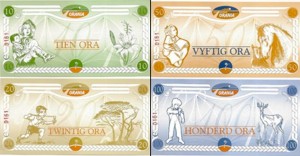 The currency in Orania

See footage from Guba in one of Micks Corn Flake films

Guba – a pretty big and well organised project we visited in Swaziland which uses permaculture ideas, earth-building techniques and has a volunteer program. They also have a school for children and workshops for adults to teach locals how to reduce their dependency on the system, all for no profit and just to help people.

Happy Toes – a project we visited a couple of times as we love how they grow their own food, use earth-building techniques and use volunteers to help with food production and improving their property in exchange for food, a bed and learning something about going back to nature.

Our film about the project 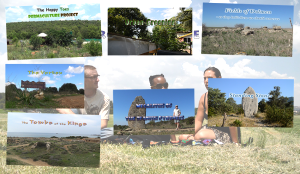