We have visited many ancient sites over the years but non are shrouded in so much mystery as one particular site we visited at the end of 2016. We crossed the English channel and drove to the south coast of Brittany, an area of France famous for having one of the densest collections of megaliths in the world.

This is the film we made

Most types of megalithic structure are found scattered across the face of the planet but stone rows are not such a globally abundant feature, mainly found at sites in the U.K or France. They are usually associated with stone circles such as the famous avenues running up to the circles in Callanish or Avebury but even these rows of stones fade into insignificance when compared to the alignments in Carnac. 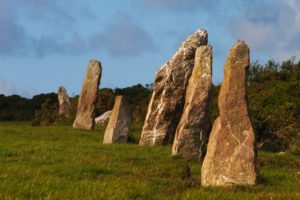 We got some amazing drone shots

Stretched over a 4km long, 100m wide section of the French countryside there are more than 3000 megalithic stones that have been placed in alignments, with 13 lines found at the widest point. The stones range from 3m to just over half a metre tall, with a maximum weight of 77 tons. Some of the stones stand out from the rest, such as the table stones lying on their side, the various stones not sitting exactly in the lines or the 3 stones forming a line which faces east to west rather than sitting within the alignments.

It is thought the stones were sourced from local quarries during the Neolithic period around 4,500 B.C, and current thinking is that they were erected by multiple generations, each adding to the alignments over the centuries. Reports from the first extensive excavation in the 1860s stated that fewer than 700 of the 3,000 stones were still standing many of which were re-erected in the 1930’s and 2 local legends tell how either Roman or Pagans soldiers were on the march in the area and were turned to stone by the wizard Merlin or Pope Cornelius.

Next to the alignments you find single standing stones on their own as well as stone circles and dolmen attached or very close to the alignments. The lines are divided into 4 sections with gaps between each, Menec being the section on the west, then Kermario, followed by Kerlescan and finally Petit Menec, the smallest collection of stones hiding in the forest.

You can see the accuracy of the linear arrangements 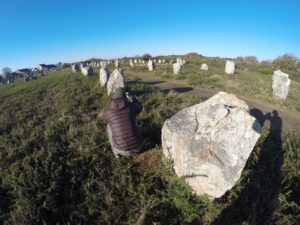 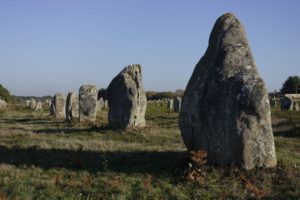 Some of the larger stones 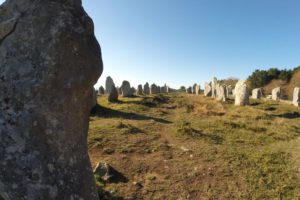 This stone sits out of the alignments

Menec – The Menec section is approximately 1,165m long with a maximum width of 100m, formed by 11 rows of stones. The stones are shorter in the middle of the section but taller on either end, there is a stone circle on the eastern side which is very ruined with only about 10 stones remaining but the circle on the western end contains 71 stones and is shaped like an egg. The geometry of this circle is fascinating as it has basically been formed from different sections of different sized circles built around a 345 triangle, there are some visuals to explain this better in our film. On the western end is where you find the table stone lying on its side and the 3 stones aligned east to west. 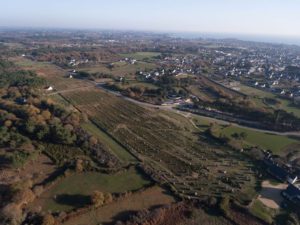 The stones just keep on going 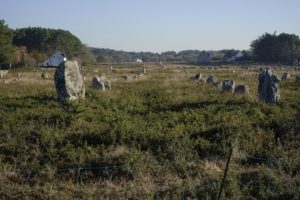 Looking east from the middle 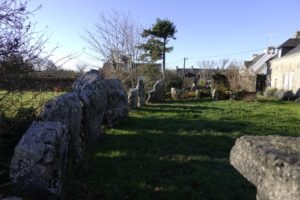 Stones from The egg shaped circle

Looking East at the Kermario section 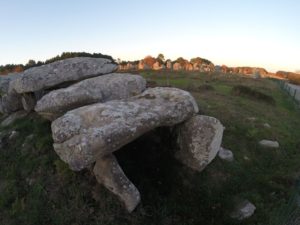 The dolmen on the east 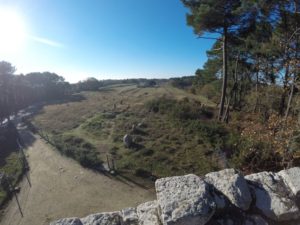 The view from the viewing tower

The lines going into the trees 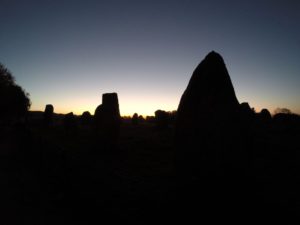 The view from our tents

Kerlescan – This section has 555 stones divided over 13 lines and again there is a stone circle on the western end, although this one has less than 40 stones remaining, and we noticed how there were no trees growing in the middle of the circle despite trees covering the area. At the western end there is also a definite stop to the lines, the stones stop and form a kind of wall, with touching stones marking the end of the alignments and the start of the stone circle. 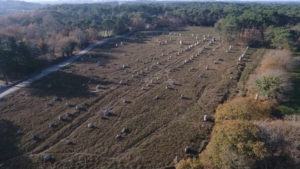 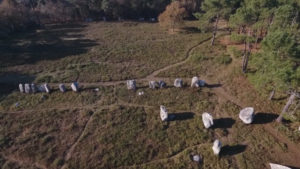 The wall and the treeless area 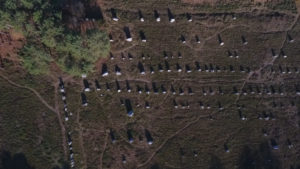 The wall from above 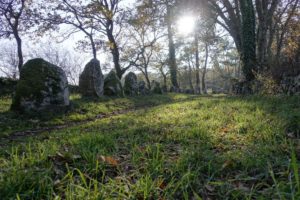 Stones hiding in the forest

Petit Menec – Approximately 300m passed the eastern end of Kerlescan is this smaller collection of stones which is often forgotten by visitors. These moss covered stones hidden in the forest follow a gentle curve through the trees with only 4 or 5 lines at the widest point and the stones don’t get much taller than a metre.

A wide variety of theories have been put forward to explain the purpose of these mysterious stone alignments in Carnac, one researcher even suggested they may have been an elaborate earthquake detector, while many think they were erected to honour descendants of our ancestors. Others think they were used as astronomical calendars so ancient farmers could monitor the rows of stones and the direction of sunsets to know the seasons and when to plant and harvest their crops.

Alexander Thom, who has surveyed many megaliths in Britain and France, believes that Carnac was a huge lunar observatory and that measurements he took there support his concept of the megalithic yard. In more recent years Howard Crowhurst has added to his work and made some amazing discoveries about the geometry found in the distances between the stones and the other surrounding structures.

Other Structures in the Vicinity

There are many menhirs, dolmen, tumulus and stone circles in the area, we only had time to visit a few.

St Michael’s Tumulus – is 125m by 60m and was built from 67,000 tons of stone between 5000 and 3400 BC, officially thought to be a tomb for the ruling class due to the discovery of stone chests, pottery and jewellery. It is connected via a leyline to Mont St Michel on the Northern coastline of France, which itself is linked to St Michaels Mount in England and Skellig Michael in Ireland. 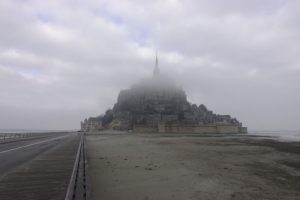 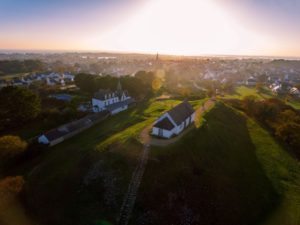 Inside one of the dolmen 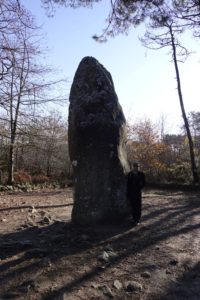 The Manio Giant – This is a huge standing stone lying several hundred metres from the alignments, it stands over 5m tall and many locals tell stories of seeing energies in this area.

Tumulus de Kercado – This was one of 4 tumulus we visited and went inside. It features the mound with a dolmen structure forming the framework, there is a menhir on the top and a semi-circle of stones around the outside. In the large chamber numerous artefacts were found, such as axes, teeth, beads and pearls but again whether these were belongings of the builders or later inhabitants it is almost impossible to know. 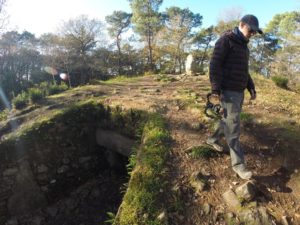 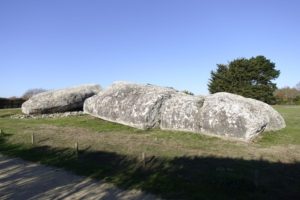 le Grand Menhir Brise – A huge standing stone that is now broken into 4 pieces which some suggest was linked to the alignments as part of an astronomical observatory. When it was originally erected it would have stood over 20m tall and is estimated to have weighed around 350 tons, which is why we paid it a visit as it’s the sheer size of some of the stones that the ancients transported and erected that amazes us.

Brittany is covered in megaliths that have been deliberately placed in significant locations but actually so is France with more than 10,000 sites estimated to stand within its borders, and indeed the entire planet is covered in dolmen, menhirs, stone circles, stone spheres, pyramids, cart ruts, tumulus of varying sizes and huge rock-cut temples, which is why we believe there has been a global civilization before our current one.